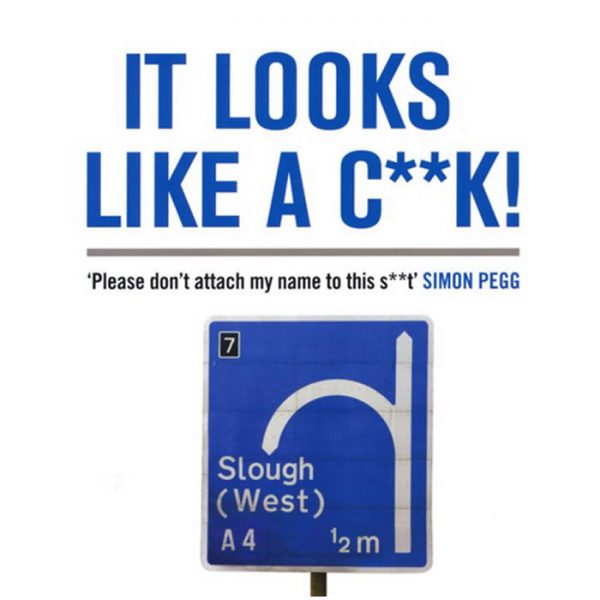 For those of you who are still curious, what you get this time is a bunch of photographs of different things that supposedly look like cocks. Clouds, Fungus, icebergs, fruit, a beluga whale, etc, etc, each with a little bit of text and a percentage rating of how much it resembles an actual penis.

Go the Fuck to Sleep is a book written by American author Adam Mansbach and illustrated by Ricardo Corte's. Described as a "children's book for adults"

When Adam Mansbach's daughter Vivien was two, she would take up to two hours to fall asleep. Exhausted and exasperated, one night Mansbach posted a note on Facebook, "Look out for my forthcoming children’s book, Go the — to Sleep". Following his post, friends of Mansbach responded enthusiastically, so that Mansbach began writing what was then only a hypothetical book.

Cleverly written, this book has to be seen to be appreciated and is the perfect gift for any parent to be.

The title alone means that this book will be thumbed through by plenty of curious punters. Published by Bloomsbury and presumably aimed at the upcoming Christmas market, this is a pocket-sized hardback stocking-filler. You know the sort of thing – usually piled up near the checkout in bookshops, often surrounded by other titles for people who don’t actually read books. The Little Book of Calm, anyone?

For those of you who are still curious, what you get this time is a bunch of photographs of different things that supposedly look like cocks. Clouds, Fungus, icebergs, fruit, a beluga whale, etc, etc, each with a little bit of text and a percentage rating of how much it resembles an actual penis.

There’s a disclaimer stating that none of the pics have been touched up or ‘fiddled with’ (that’s what passes for a ‘joke’ here), but frankly, you’d be hard pressed to care. Admittedly, a couple of the pictures really do look like dicks, but some don’t bear any resemblance to anything you will have ever seen attached to any man.

To put it bluntly, this silly little tome is utter rubbish. You’ll grin as you reach for it, but the smile will fade pretty rapidly. Some might think the idea is cute and, yes, many of us love looking at rude pictures, but these aren’t rude – just really, really stupid. 25 bucks for 42 vaguely phallic images that even sniggering schoolkids wouldn’t look at twice?

It’s a waste of paper, a waste of every resource that went into its production, a waste of money and a waste of your time. If you have the dollars to throw away, I urge you to give them to your local Big Issue salesperson, or buy a proper book, or even a book of pictures of real cocks. But not this. It’s cheap crap that is designed to titillate and which will no doubt be hoping to swallow up our pink dollars, but which will ultimately end up perched on bookcases everywhere, not opened since the day it was received.

I’ll admit I smiled once. And that was when I turned it over to read the blurb on the back from Simon Pegg – “please don’t attach my name to this shit.” Avoid, avoid, avoid.

We're online shoppers too and we know that when you've bought a product you love, the wait for it to be delivered can be painful and frustrating. That's why we offer FREE overnight shipping for orders over $99! Our warehouse team don't dilly dally, they process your order super fast and our reliable partners will get your order out to you, pronto! In fact, the vast majority of our orders arrive the very next business day.

Not everyone is as cool as you. Buying the perfect gift is that much easier, when you know you can get a refund or exchange it for one of our many other seriously cool products. As long as the product is in its original brand new condition, we'll happily have it back within 30 days.