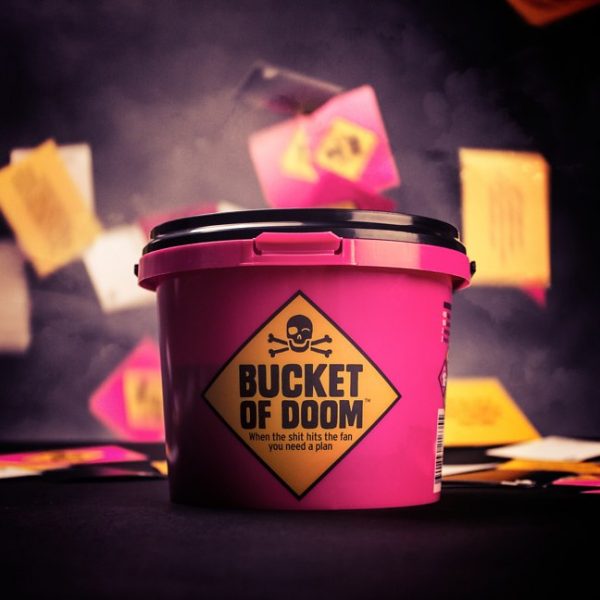 Bucket of Doom: the death-dodging party game where players must escape terrifying situations with the help of almost-useless objects.

Have you ever found yourself locked in the boot of an angry mobster's limo, mere seconds from being cubed by a car-crusher, with only a tin of Alphabetti Spaghetti® and some nipple tassels to free yourself? These are exactly the kind of spectacularly bad scenarios that you're likely to encounter in Bucket of Doom.

First you read out one of the 'Doom' cards, for example:

Next you look at the 8 'Useless Objects' cards at your disposal and take turns to reveal your elaborate escape plans. These objects could be anything from a 'Prize-Winning Marrow' or 'Toilet Brush' to a 'Barry White CD' or 'Double-F Breast Implants'. But which do you choose?! And can you convince your fellow players that your daring scheme is watertight?

Finally, all the players vote on their favourite story and the best plan wins – it's a game that rewards inventiveness, persuasive storytelling and outright absurdity.

The geniuses behind Linkee have created another instant classic, and unlike a lot of party games that get a bit samey after a few plays, Bucket of Doom just keeps on giving as you craft new and preposterous stories time and time again.

We're online shoppers too and we know that when you've bought a product you love, the wait for it to be delivered can be painful and frustrating. That's why we offer FREE overnight shipping for orders over $99! Our warehouse team don't dilly dally, they process your order super fast and our reliable partners will get your order out to you, pronto! In fact, the vast majority of our orders arrive the very next business day.

Not everyone is as cool as you. Buying the perfect gift is that much easier, when you know you can get a refund or exchange it for one of our many other seriously cool products. As long as the product is in its original brand new condition, we'll happily have it back within 30 days.