Bucket of Doom: Death Dodging Party Game it would tempting to simply take my review of Cards Against Humanity and literally reskin it with the review of Bucket of Doom. Both use the same mechanic in that each turn one player has to match answers from each of the other player's hand to a given question and chooses the winning answer. Which makes both very similar to Apples to Apples, but what Bucket of Doom and Cards Against Humanity have in common is a mature subject which means that they are games for adults. Such a reskinning though, would be simplistic and unfair to Bucket of Doom. 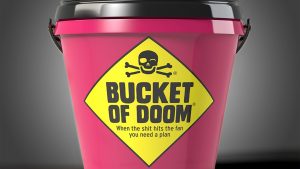 Funded through Kickstarter and published by Big Potato, Bucket of Doom is a game in which you find yourself in incredibly dangerous or awkward situations and the only thing that you have to hand is very probably utterly useless. Like Cards Against Humanity, the packaging of Bucket of Doom is quite striking. Where Cards Against Humanity makes use of stark black and white throughout, Bucket of Doom actually comes in a bucket—a bright ‘toxic’ pink bucket. Inside can be found some five hundred cards, of which one hundred are Doom cards and four hundred are random Object cards. Also included in the box are the rules sheet, two voting pads, and two pencils.

The full colour Doom cards each give situation that it is deadly, or least perilous—and quite possibly controversial. For example, the simply perilous include ‘You’re an intrepid archaeologist and a giant boulder is chasing you down a dead-end tunnel’, ‘You’re James Bond strapped to a table. A redhot laser is burning a path towards your ‘bits’.’, or ‘Darth Vader senses that you did the ‘wanker’ sign behind his back. He starts suffocating you with his death pinch.’, whilst ‘You’ve been nailed to a cross for being nice to people.’ and ‘You are Edward Snowden and you’ve inadvertently boarded a flight to America.’ are certainly bordering on the controversial. The various Object cards range from ‘Record-breaking paper aeroplane’, ‘Hi-Vis Jacket’, ‘Bowl of Egg Whites’, and ‘Feather Pillow’ to ‘Justin Bieber’s Brain’, ‘A Grumpy Gnome named Gary’, ‘Full Colostomy Bag’, and ‘Number for a very prompt taxi service’. The Object cards are double-sided, white on one side, black on the other, and in a nice touch, have an object on each—thus giving not just four hundred objects, but eight hundred! 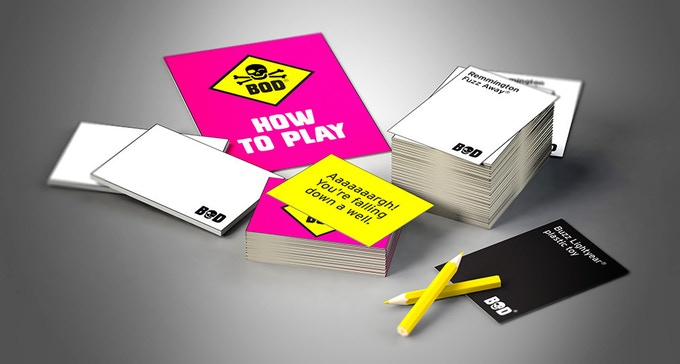 At the start of the game, each player receives eight Object cards. One player draws and reads out a Doom card and gives a few moments for the other players to look through their hands. Each will select one Object and think up a way of his using it to help his escape from the situation described on the Doom card. Everyone then takes it in turn to explain how the item described on their Object helps in their escape. Once the explanations are given, everyone gets to vote on the answers—of course you cannot vote on your escape plan—and the player with the most votes is awarded the Doom card. The next player reads out Doom card and so on and so on. The first player to garner three, five, or seven Doom cards—depending upon the length of the game—wins the game.

For example, it is Debbie’s turn to read out the question on a Doom card, which is, ‘Walking home after a night out wearing Lady Gaga’s meat dress you are attacked by militant vegans.’ Peter, Stef, and I select what we think are suitable Object cards from our hands and concoct our explanations. So Peter grabs ‘Harry Potter’s owl, Hedwig’ and sends the bird off to get help from the wizard, who will either save me or resurrect him should the vegans pulp him. I pull out a ‘10m roll of turkey foil’ and wrap it around myself so that not only is the dress hidden, but what the vegans see I am wearing is their own clothes reflected in the foil—thus I am one of them! Stef grabs a ‘Pregnancy test kit’ and with a shout of “Don’t hit me! Think of the baby. I’m only wearing the dress to satisfy my pregnancy cravings!” Everyone takes a moment to consider their vote, but it is unanimously in favour of Stef’s escape plan and he gets the Doom card.

Of course, that was a mild example, but both the Doom cards and the Object cards are likely to engender much stronger, if not viler escape plans. Physically, Bucket of Doomis as simple as its game play. Its production values feel do slightly cheap, in particular the quality of the cards meaning that that they are not as durable as they could be.

Although there is much that is similar between Cards Against Humanity and Bucket of Doom, the play of the former is absolute in terms of its results and is less inventive. This does not mean it no less fun, but in comparison, Bucket of Doom is more flexible in terms of its results and is more inventive because it requires a greater input upon the part of the players. In this it shares more in common with Mad Science University from Atlas Games—both it and Bucket of Doom involve storytelling, and this aspect of the game is dependent upon the players. Which means that the humour of the game is also dependent upon the players. If that does not work, then the game is no fun.